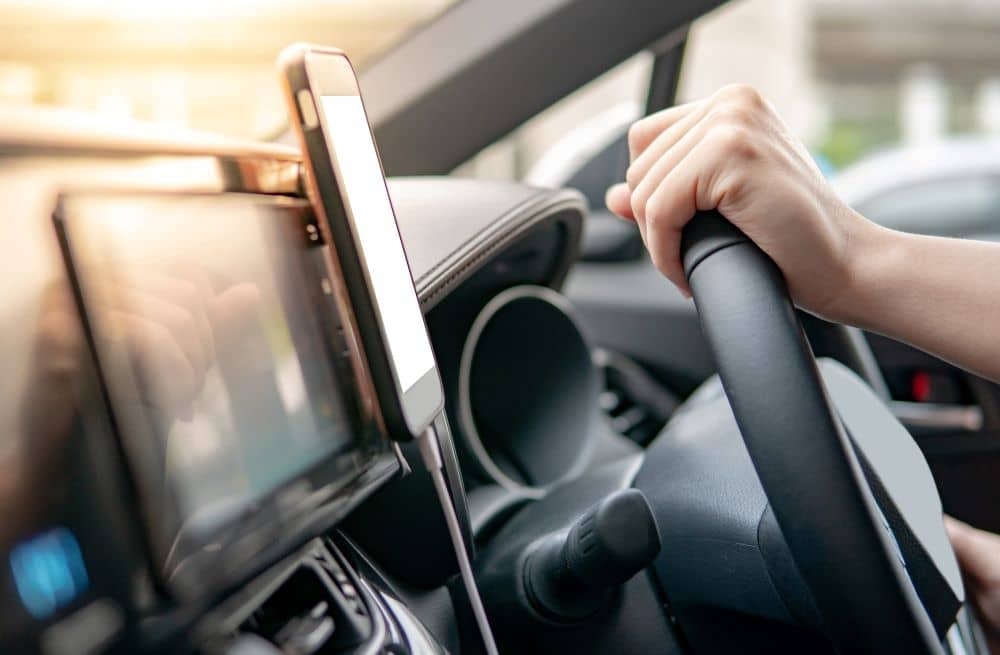 Are you wondering what the rules are for P platers using GPS in their car, either through Google Maps or Apple Maps on their phone or through a dedicated GPS device?

In this article, we’re going to look at the rules around using a GPS in your car on your P plates in each state of Australia.

In NSW, you can use GPS on your P plates if it is a stand-alone GPS unit built into your car or the stand-alone GPS device is secured in a commercially designed holder. The rules say you must not “use any mobile phone while driving, or while your vehicle is stopped but not parked. This includes hands-free devices or loud speakers” and also say “You must not drive with a digital screen on if you can see it, or it could distract another driver, unless you’re using it as a driver’s aid. In this case, it must be in a holder fixed to the vehicle or built into the vehicle.

Your passengers can use digital screens, but the screens must not:

In QLD, you can’t use GPS on your P plates due to the complete ban on mobile devices and GPS loudspeaker functionality. The rules say “All drivers are banned from holding a mobile phone in their hand or having it rest on any part of their body, such as their lap, while driving. This applies even if you’re stopped in traffic. The phone does not need to be turned on or in use for it to be an offence. Learner and P1 drivers under 25 must not use hands-free, wireless headsets or a mobile phone’s loudspeaker function. If your phone is in a pocket of your clothing or a pouch you’re wearing, you must not use it in any way. This includes touching it, looking at it or operating it with your voice. Passengers of learner and P1 provisional drivers are also banned from using a mobile phone’s loudspeaker function.” See the official Queensland P1 licence page for more info.

In the ACT, you can use GPS on your P plates, provided that the device is not being held and the route is chosen prior to the trip. The rules say “Learner and provisional drivers have been subject to a full mobile device ban. So, when you’re driving – it is illegal to text, use social media, use blue-tooth, handsfree or speaker mode. If you even touch your mobile device – to skip a song or talk-type message – you could lose up to $600, four demerit points and maybe even lose your licence.

Operating a vehicle requires your full attention. Using mobile devices while driving is distracting and can cause crashes that could result in injury or death. Any activity that distracts a driver while operating a vehicle is dangerous and can result in lane deviations, greater fluctuations in speed and delays in driver reaction time. Studies also suggest that hands-free phone use is no safer to use while driving than hand-held devices. This is because cognitive distraction has the most significant impact on driving performance.

There is an exception for listening to music and podcast type audio, provided the device is not being held by the driver and does not require interaction by any means, including by voice, while driving. We encourage drivers to put the device into Do Not Disturb mode to remove the temptation to touch it to skip songs or change apps. Please note the ban includes hand-held or wearable devices, such as headphones or a speaker, so you cannot touch them while driving.

There is an exception for using a mobile device for GPS, provided the device is secured in a mounting affixed to the vehicle (eg. mobile phone holder, blue-toothed) and does not require interaction by any means, including by voice, while driving. You should set up your GPS instructions before you drive.” See the official Australian Capital Territory ACT learners and provisional drivers page for more info.

In VIC, you can use GPS on your P plates if it is a stand-alone GPS unit built into your car or the stand-alone GPS device is secured in a commercially designed holder. The rules say you can’t “use a mobile phone of any kind (not even a hands-free, or hand-held to message) including a GPS or read any text messages” and also say “A navigation device (including a GPS unit) can be in operation but it must be an integrated part of the vehicle design, or secured in a commercially designed holder, which is fixed to the vehicle. A driver is required to have proper control of a vehicle, the entering of address information in a GPS while a vehicle is moving would be contrary to this rule. Address information should only be entered while a vehicle is pulled over and parked. Taking your eyes off the road for more than 2 seconds doubles the risk of crash. Alternatively, voice recognition is strongly recommended. All learner and probationary car and rider licence holders and riders with an E condition can operate a navigation device if it meets the above requirements and it is not part of or a functionality of a mobile phone.”. See the official Victorian Vicroads P Plate page for more info.

In TAS, you can use GPS on your P plates if it is a stand-alone GPS unit built into your car or the stand-alone GPS device is secured in a commercially designed holder. The rules say “All learners and P1 licence holders are banned from any mobile phone use. This includes hands-free and speaker mode. The total mobile phone ban does not include playing music or GPS, as long as the phone is set up prior to commencing driving so you do not interact with it in any way while driving. Standalone GPS devices can continue to be used during the learner and P1 stages from 1 December. New drivers have limited experience and need to devote their attention to driving. Using a mobile phone, even hands-free or on speaker mode, while driving causes distraction and increases crash risk. Removing distractions like mobile phones is a proven way to help reduce distractions and protect new drivers.” See the official Tasmanian Plates Plus page for more info.

In SA, you can use GPS on your P plates if it is a stand-alone GPS unit built into your car or the stand-alone GPS device is secured in a commercially designed holder. The rules say “you must not use any mobile phone function while driving, including hands-free mode and Bluetooth technology or loud speaker operation” and also say “A Provisional 1 or learner driver is permitted to use a Navigational System (GPS), provided it is an original component of the vehicle being driven and has been built as part of the vehicle design; or it is a standalone GPS that is secured in a mounting unit that has been commercially designed for the purpose of holding a GPS and is affixed to the vehicle as per the instructions provided by the manufacturer of the mounting unit.” See the official South Australian MyLicence page for more info.

In WA, you can use GPS on your P plates, provided that the device is not being held and the route is chosen prior to the trip. The rules say “A driver or rider of a vehicle can only touch a mobile phone to make, receive and terminate a phone call if the phone is secured in a mounting affixed to the vehicle. If the phone is not secured in a mounting, it can only be used to receive or terminate a phone call without touching it (e.g. using voice activation, a Bluetooth hands-free car kit, ear piece or headset). It is illegal for the driver of a vehicle to create, send or look at a text message, video message, email or similar communication, even when the phone is secured in a mounting or can be operated without touching it. GPS may be used by a driver whilst driving if no touch of the keypad or screen is required.” See the official Western Australian Department of Transport page for more info.

In in NT, you can use GPS on your P plates, provided that the device is not being held and the route is chosen prior to the trip. The rules say “Drivers can only use a mobile phone while driving to make or receive an audio phone call or as a drivers aid. This is only permitted if the phone:

Other similar communications that require you to touch your phone, including emails, text messages, video calls, video messages are not permitted. You must not drive a vehicle that has a television or VDU operating and visible to you or drivers of other vehicles. See the official Northern Territory Government licence page for more info.

For drivers who have passed their P Plate test and are ready to upgrade from L Plates, their first question is often: What colour P Plates do I need? This article will look at the P Plate colours you need in each state. 📚 ContentsIn NSWIn QLDIn ACTIn VICIn TASIn SAIn WAIn NT In NSW For new P Plate drivers in NSW, you will get a P1 licence and the P1 licence colour in NSW is a red-letter P Plate...

You’ve passed your driving test and have your P plates or you’ve upgraded from red P plates to green P plates and the question you have is: How many passengers can I have when I’m driving on my P plates? This article will look at how many passengers you can have in each state when you’re on your P1 and P2 P Plates. 📚 ContentsIn NSWIn QLDIn ACTIn VICIn TASIn SAIn WAIn NT In...

You’re on the final stretch of having your provisional licence and you’re wondering how much longer until you get your full licence. In most states of Australia, you start on P1 red P plates then progress to P2 green P plates before getting your full licence. In this article, we look at how long you have your green P plates on your car in each state. 📚 ContentsIn NSWIn QLDIn ACTIn...

In Victoria, there are over 1,000 types of fines related to driving on the road and a handful of important fines related to driving on your L or P Plates. Let’s look at some of the FAQs about fines for L and P Plate drivers in VIC. 📚 ContentsFines on your P PlatesDo I get a fine for not having P Plates on my car?What happens if my P Plates fall off or blow off my car?What is the fine for...